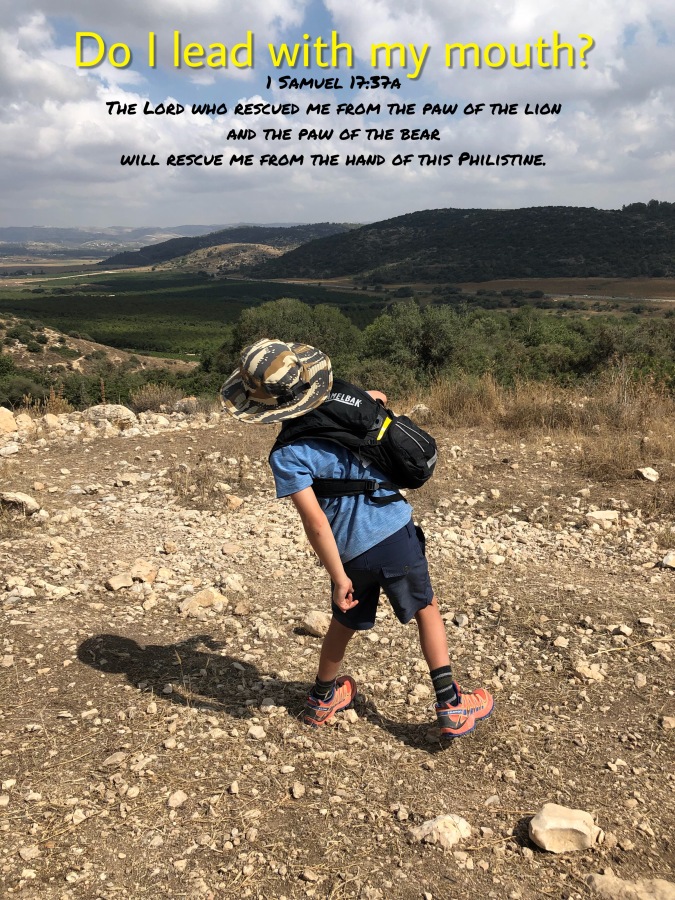 The story of David and Goliath…  Growing up it was a story that I and many others raised in Sunday school heard over and over… If someone would have asked me ten years ago did I know this story, I would have laughed and said of course.  My summary would have been the weak chosen shepherd defeats the giant.  What I thought I knew was true, but just scratches the surface of the great story.  I have been blessed enough to travel to Israel 2 times, and each time the Rabbi I walk with uncovers more of this story for me.  On my trip this past June I learned how David led with his mouth, the significance of the Hebrew words used in the story, and how numbers used in the text have significance to the Jewish reader.

David was God’s servant leader who led with his mouth.  In 1 Samuel 17:37 he recalls how the Lord rescued him in the past, and declares God will rescue him in the future:

I am in awe of David’s faith.  Do I lead with my mouth by faith? What are the intentions of my heart? Often my response in life to different events that happen and things that are said to me are tied to the attitude of my heart. Deuteronomy 30:14 talks about the word of God buried in your heart and the outcome of obedience versus disobedience:

No, the word is very near you; it is in your mouth and in your heart so you may obey it. See, I set before you today life and prosperity, death and destruction.”

In Proverbs 4:20-25 it talks about the result of obedience to His words leading to good health.  It is the attitude of the heart focused on Gods’ word that projects good health:

My son, pay attention to what I say; turn your ear to MY WORDS. Do not let them out of your sight, keep them within your heart; for they are life to those who find them and health to one’s whole body. Above all else, guard your heart, for everything you do flows from it. Keep your mouth free of perversity; keep corrupt talk far from your lips. Let your eyes look straight ahead; fix your gaze directly before you.

When I lead with my heart my true identity is revealed.  It reveals to the world if I am guarding my heart above all else and meditating on God’s word, or if I am in bondage to something else. What if I, like David, declared victory ahead of time? Instead of using idle gossip when someone angered me, instead I spoke words of scripture giving life to the situation? What if in my desert, I start praising him for his ways and perfect plan?  What if there was so much of Gods’ word in my heart, that what flowed out of my mouth were words of Bible that I had meditated on… What do you store up in your heart?  Like David I want to declare his victory before I act, and like him my actions were meditation on what God has promised me and my response to trials and battles were words of praise recalling how God moved in my past… David’s mind recalls the faithfulness of his God and he says to Saul “Let no one lose heart on account of this Philistine; your servant will go and fight him.”  Who guides David? The Lord guides every step he takes.  Who do I allow to guide me?

In addition to leading with my mouth by faith a integral lesson was learned by the numbers mentioned in the story.  In 1 Samuel 17:40 he doesn’t hesitate to go ahead and prepare for battle:

Then he took his staff in his hand, chose five smooth stones from the stream, put them in the pouch of his shepherd’s bag and, with his sling in his hand, approached the Philistine.

When a western hears this verse they have a literal interpretation.  To the Jewish mind the 5 stones have more significance. In the Hebrew language numbers have meaning.  There are three numbers seen in the story of David and Goliath.  The numbers 5, 6, and 8 would have significant meaning to the Jewish people.  Here are there meanings:

6 – The number 6 means incomplete, the number of man.  Goliath 666, 6 is a description, it can also refer to scales and or serpent.

8th (brother) – 8 is the number of restoration. David was the 8th brother.

So now when I hear “5 stones,” I think to myself he chose five stones to represent the Torah, Gods word. David reached into the flowing water of a stream, which represents living water, or as Dobson’s First Century Study Notes state when talking about Lev 14:

Any water that springs from the ground in Hebrew is referred to is Living Water.  He uses GOD’S WORD and his LIVING WATER to defeat Goliath.  When I hear David was the eighth son, I think restoration is coming.  The name Goliath in Hebrew equals the number 666.  When I see and hear 1 Samuel 17:48-49:

As the Philistine moved closer to attack him, David ran quickly toward the battle line to meet him. Reaching into his bag and taking out a stone, he slung it and struck the Philistine on the forehead. The stone sank into his forehead, and he fell facedown on the ground.

I hear The Anointed King crushed the head of the snake.  David by faith defeated Goliath with a stone… A stone did you hear me!  Stone has so many significant meanings when considering its use in the Torah.  The Ten Commandments were written on two stone slabs. Stones reference a memorial, standing stone from Joshua.  A large stone was placed underneath a tree to represent a covenant.  To a New Testament believer Jesus was the stone the builders rejected.  God is the rock that is higher than I.  The stone just happened to hit Goliath in between the eyes.  The word for forehead is Metsah and can mean “brow” or even “stubborn.” The “forehead” or between the eyes is where Jews would place the commandments (Deuteronomy 6:4-6), in between their eyes. This means when they heard the story in Hebrew as Kent Dobson says they heard this:

the stone strikes Goliath in the very place the Jews wore the commandments, causing him to fall facedown in worship.

Imagine what he felt like as he stood over him… I imagine he thought he had escaped sure death of Goliaths sword, he knew he had not won the battle, it was God who gave victory, who saved his life, It was his great God who gave him life ….The words he spoke echoed through the people’s mind: “for the battle is the Lord’s, and he will give all of you into our hands.” A reference for verse 1 Samuel 17:51 references Hebrews 11: it says by faith the many hero’s’ did these things: “and escaped the edge of the sword; whose weakness was turned to strength.”  Goliath never stood a chance, and neither do the Goliaths in your life. If we approach our trials, mountains that need to be moved, valleys and deserts as David.  You see nothing on this earth can harm you when you live with eternity in mind.  When you face the challenges of this temporal life with GOD’S WORD and his LIVING WATER nothing can harm you.

What are the Goliaths of my life of your life? Do I use his word to defeat them? Do I rely on his living water to sustain me against my Goliaths? Are the meditations of my heart pure? Is what comes out of my mouth a reflection of Gods’ promises?

Breath Blake.  How often have the words that flow from my mouth been not of God…so many times I can not count.  So I breath, and praise him for his goodness.

🙏May the mediation’s of my heart be pleasing to you oh God, may every word that comes out of my mouth be life giving, a reflection of your heart, your thoughts, your ways, and your word. My treasure is you, may my life reflect that oh God.

Luke 12:34: For where your treasure is, there your heart will be also.

Lord help me to look at every situation as you do.  May I look at the heart of everyone and May the meditations of my heart be solely focused on you.

Metsah can mean “brow” or even “stubborn.” The “forehead” had religious significance in the Biblical tradition. Dt 6:4–8 (the Shema) commands the Israelites to place the commandments literally “between the eyes,” translated in English “forehead.” Though two different Hebrew words are used for “forehead” in 1Sa 17:49 and Dt 6:8, the stone strikes Goliath in the very place the Jews wore the commandments, causing him to fall facedown in worship (Kent Dobson, NIV First-Century Bible Study Notes, 1 Samuel 17).

View all posts by ashesaremybeauty

This is a text widget, which allows you to add text or HTML to your sidebar. You can use them to display text, links, images, HTML, or a combination of these. Edit them in the Widget section of the Customizer.
%d bloggers like this: